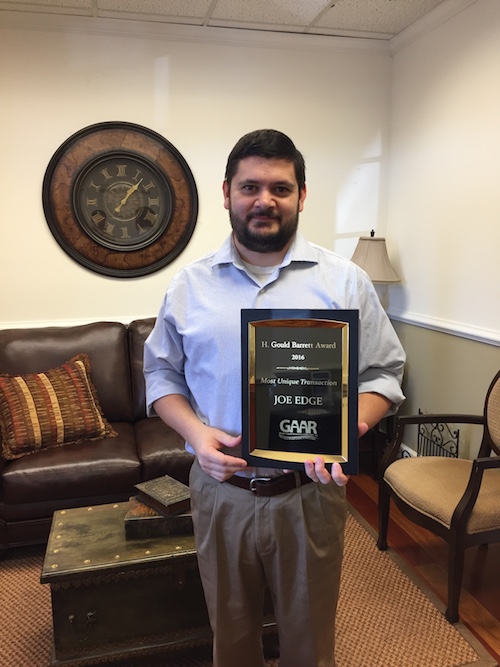 February 14, 2017 (Augusta, GA) - Sherman & Hemstreet announced today that Joe Edge, President of Sherman & Hemstreet, won the H. Gould Barrett Award from the Greater Augusta Association of Realtors. The award is handed out annually to the agent with the most unique sale of the year.

The transaction that one the award consisted of 96 separate parcels of which 5 were vacant lots, 4 were commercial rentals and 87 were single family homes. Included in this transaction were the seller, who was also a licensed broker and a buyer that was an out-of-state broker using a 1031 exchange.

Major issues that arose in the transaction were related to the 1031 exchange requirements that only allow a buyer to only exchange up to three properties.  With this transaction there were 96 total parcels involved. Additionally over 96 title searches had to be completed in 30 days and distributed into three owners’ title policies in two states (GA & SC).

Once the challenges with the 1031 exchange and title insurance were resolved, a purchase price and terms were agreed to. But, to make matters more difficult, one week prior to closing one of the units burned down, resulting in even more negotiations, that parcel being removed from the package and the price being reduced based on the partial re-conveyance allocations previously negotiated, leaving a final sales price of $3,570,000.

After resolving all of the challenges presented through very difficult negotiations and complex discussions with multiple third parties, the transaction closed smoothly with both the buyer and seller happy and satisfied.