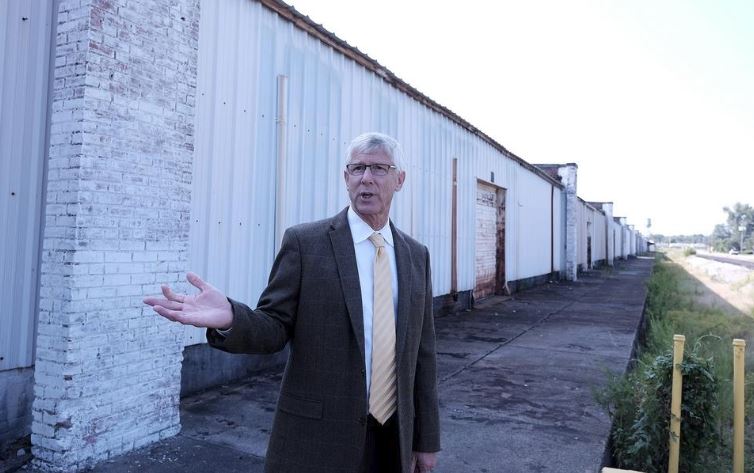 An old historic warehouse and a mostly abandoned train yard that once helped drive Augusta's cotton boom could see new life as housing units under plans being developed by an Albany, Ga., entrepreneur.

Pace Burt of Burt Development bought the complex at 1812 Slaton St. about six months ago, and it is in the process of being rezoned to allow multifamily units.

"When I saw this project come up for sale, I just thought it was extremely unique," he said. "It's 24 acres, and even if the buildings weren't there, 24 acres contiguous near downtown is pretty rare. So I thought either way if the buildings were too far (gone) to be salvaged we'd have that acreage. We're very excited."

That could help address a current and future need with the growth of cyber downtown, said Matt Aitken of Sherman and Hemstreet, who brokered the deal for the site.

"That's the concern of a lot of people that there is no housing downtown," he said. The historic nature of the site would appeal to millennials, Aitken said.

The plan at this point is to put in around 190 units in the 350,000 square feet of warehouse space, but he is also applying for designation through the National Park Service that will allow him to access historic tax credits, which even if it goes as planned could take eight months or so, Burt said.

"But we feel confident that they will certainly want to see these buildings preserved as do the folks of Augusta because it's such a huge part of their history" he said.

There is an interesting history to the site and to the area. It was called Harrisonville at least as far back as 1851, said Tina Monaco, historian at the Georgia Heritage Room at Augusta Library.

"First it was a village and then it was incorporated in 1912" she said.

"I don't know if today people realize it used to be its own town," said genealogist Tina Rae Floyd of the Georgia Heritage Room.

According to the book "Augusta and its Railroads" the train yard was built 1907-08 by Georgia Railroad to relieve congestion on Augusta's rails and expand its available yards. Burt said he was told by an elderly member of the famed Whitney cotton family that they used to lease some warehouses on the site and had a compress that operated there.

"Augusta was the second-largest inland cotton distributor in the nation," Burt said. "The farmers would have all of their cotton sent in. They would have these machines that would squeeze the cotton down into bales that could be transported to Europe or other parts of the country. They were stored there until they could be shipped off."

There were apparently other businesses at the site ,a May 15, 1911, Augusta Chronicle story details a warehouse catching fire at the Frank Rouse Distillery and Augusta Canning Co. there, according to Floyd.

Burt has previously created upscale apartments and lofts in historic buildings around the Southeast, such as the West Village Lofts at Brandon Mill in Greenville, S.C., the Flats at 249 downtown hotel conversion in Albany and the Marine Street Lofts in Mobile, Ala. He is excited about the possibilities for these buildings, which are currently in "terrible shape" and need to be stabilized but can be saved.

About a third of the space is open green space, and he sees a lot of different opportunities to put in amenities.

"I'd like to see an amphitheater or a brewery or artist studios," Burt said. "We do that in a lot of our projects where we buy these massive buildings' where the square footage is relatively cheap."

"It gives you the ability to give back to the community and help revitalize the community," he said. "You pass that on and you create some type of enclave where people want to come and work and play and get creative."

The ability to take that history and breathe new life into it is an exciting challenge, Burt said.

"You can't go wrong revitalizing these buildings," he said. "These buildings have a lot of character and they are really fun. The units are going to be really big. It's going to be something fun to try and work with."